A few days ago I rented myself a nice little toy. On the one hand, I had a job in photographing to do for commercial pictures, and on the other hand, since I had that lens, I just walked around in Aachen to see what might be an interesting object for wide angle photography. And there is quite a bunch of stuff suiting that purpose.

But let’s come to the technical facts first. The lens was a wide angle zoom. It has an imaging angle of 108° at max (sic!). What a fun. At a best price that is even below 400€ it’s actually the cheapest wide angle for Canon you can get out there, so I was not looking forward too much to quality and imaging quality. But then came the pictures. Some samples do show a decreasing quality and sharpness towards the edge, but as you can see, they’re mostly pretty sharp and decent in quality.

The different things I did were, for sure, architecture (and I don’t actually know a lot about how to take pictures of buildings, so I mainly relied onto my personal taste and feeling when taking a shot) and people. People from above, to be precise.

And as you might probably know, Aachen’s not too boring as well when it comes to architecture. Especially modern, technical things are well worth being photographed with such a neet lens. Unfortunately most of those buildings have already been shot to death. But you never now whether you might find a new interpretation though. Is it something that has been brought to a picture a million times, try looking for another point of view, another (post processing) interpretation…

Furthermore, we have old buildings as well. I chose some that would never ever fit in a normal lens without any distractions depicted as well. Here we go with the Ponttor, built in the 14th century, and church Heilig Kreuz sited on Pontstraße.

Last But not least, we see the not so long ago new built bureau office of Aachen Münchener insurances.

Yesterday it was time for a repeating event, a running dinner called “Rudi rockt”, taking place once a semester here in Aachen. The idea is that you build a group of two and prepare one course out of three (starter, main dish, dessert) with your team buddy. For the other two courses, you get two adresses of people you’ve (most probably) never met before. Hence, for each course, you meet four complete strangers and you have little more than an hour to get to know them. But as you can imagine, most of the people taking part in this fun event are astonishingly open minded, a great possibility to encounter friendliness and, furthermore pretty drunk people already after startes. But the point is, in my opinion, to realize how easy it can be to get in touch with people you’ve never known they existed. Nowadays a nice experience in a world that’s sometimes getting a bit too anonymous in my humble opinion.
So if you, reading this from somewhere you don’t have an event like this, why not organize it yourself, it’s definitely worth it. The resonance here is great, out of circa 40.000 students, around 2.000 took part, and furthermore also apprentices may take part.
Some more information you get here, unfortunately German only.

I feel so small when thinking about infinity.

Remember that list? Changes have been made, hence check marks added. I met my roommates from Trondheim in Delft, to go to Queen’s Day in Amsterdam on Saturday. Never thought so many people could fit into one city. That was exhausting, but a fun thing to do.

Furthermore it’s beautiful thing to meet people again in a group you’d spent quite a while with before, just to realize that not so much hase changed on the character side, that even though there’s been a distance in time, you feel like that did not change a lot. Probably that means you found some special persons. 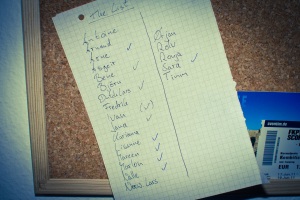 Since the weather was brilliant and I could borrow Bene’s 50mm f/1.4 lens, I also had quite a lot of fun taking pictures, here you go with a first selection.

For all of those interested in photography among you, these to pictures before I shot by taking the lens off the camera body and playing a bit around. I think, the results are quite impressive, especially for the coffee cup, where I tilted the lens a bit with the upper side towards the front, hence tilting the focal plane.

I’ve been pretty stepmotherly about my blog recently, probably due to the begin of master’s thesis and fraternity work to be done and so on. But now’s the time to take a deep breath and enjoy some days of recreational time with the family and friends at home. And for sure, some photography. For example, I had a nice chance testing my tripod, taking this awesome shot of our new fire department in my home town:

Look around you when being outside. Ever seen all these frames? I’m not talking about “real” frames you put your posters in, but the frames buildings or nature gives you. Check out this one:

Framing often gives you an interesting impression of depths and proportion, a big chimney becomes captured and suddenly seems tiny…

Enjoy holidays, acknowledge time with your beloved ones.